This series on the History of Rotary is a reproduced from a series of posts on Rotary Club of Bandar Sungai Petani's Facebook page from 9th to 23rd February 2014, which is the anniversary of Rotary.

Story of the 4-Way Test
By Herbert J. Taylor 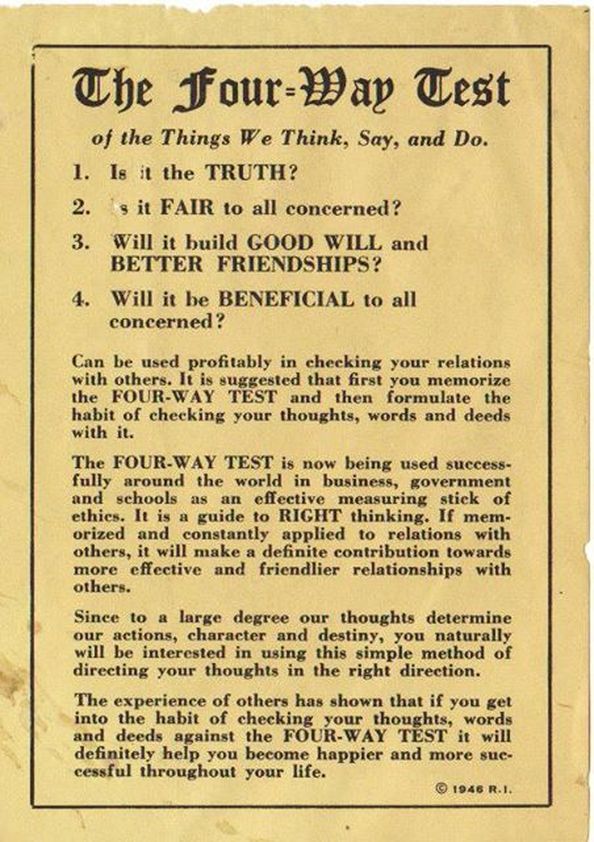 Back in 1932 I was assigned, by the Creditors of the Club Aluminum Company, the task of saving the company from being closed out as a bankrupt organization. The company was a distributor of cookware and other household items. We found that the company owed its creditors over $400,000 more than its total assets. It was bankrupt but still alive.

At that time we borrowed $6,100 from a Chicago bank to give us a little cash on which to operate.

With tremendous obstacles and handicaps facing us we felt that we must develop in our organization something which our competitors would not have in equal amount. We decided that it should be the character, dependability and service mindedness of our personnel and, second to help them become better men and women as they progressed with out company.

We believed that "In right there is might" and we determined to do our best to always be right. Our industry as was true of scores of other industries, had a code of ethics - but the code was long, almost impossible to memorized and therefor impractical. We felt that we need a simple measuring stick of ethics which everyone in the company could quickly memorize. We also believed that the proposed test should not tell our people what they must do, but ask them questions which would make it possible for them to find out whether their proposed plans, policies, statements or actions were right or wrong.

We had looked in available literature for such a short measuring stick of ethics but could not find a satisfactory one. One day in July, 1932, I decided to pray about the matter. That morning I leaned over my desk and asked God to give us a simple guide to help us think, speak and do that which was right. I immediately picked up a white card and wrote out,

"The 4-Way Test of the things we think, say or do as follows :-
1. Is it the TRUTH?
2. Is it FAIR to all concerned?
3. Does it promote GOODWILL AND BETTER FRIENDSHIPS?
4. Will it be BENEFICIAL to all concerned?"

I placed this little test under the glass top of my desk and determined to try it out for a few days before talking to anyone else in the company about it. I had a very discouraging experience. I almost threw it into the wastepaper basket the first day when I checked everything that passed over my desk with the first question, "Is it the truth?" I never realized before how far I often was from the truth and how many un-truths appeared in our company's literature, letters and advertising.

After about sixty days of faithful constant effort on my part to live up to the 4-Way Test I was thoroughly sold on its great worth and at the same time greatly humiliated, and at times discouraged, with my own performance as president of the company. I had, however, made sufficient progress in living up to the 4-Way Test to feel qualified to talk to some of my associates about it. I discussed it with my four department heads. You may be interested in knowing the religious faith of these four men. One was a Roman Catholic, the second a Christian Scientist, the third an Orthodox Jew and the fourth a Presbyterian.

I asked each man whether or not there was anything in the 4-Way Test which was contrary to the doctrines and ideals of his particular faith. They all four agreed that truth, justice, friendliness and helpfulness not only coincided with their religious ideals, but that if constantly applied in business they should result in greater success and progress. These four men agreed to use the 4-Way Test in checking proposed plans, policies, statements and advertising of the company. Later, all employees were asked to memorized and use the 4-Way Test in their relations with others.

The checking of advertising copy against the 4-Way Test resulted in the elimination of statements the truth of which could not be proved. All superlatives such as the words better, best, greatest, and finest disappeared from our advertisements. As a result, the public gradually placed more confidence in what was stated in our advertisements and bought more of our products.

The constant use of the 4-Way Test caused us to change our policies covering relations with competitors. We eliminated all adverse or detrimental comments on our competitors' products from our advertisements and literature. When we found an opportunity to speak well of our competitors we did so. This we gained the confidence and friendship of our competitors.

The application of the 4-Way Test to our relations with out own personnel and that of our suppliers and customers helped us to win their friendship and goodwill. We have learned that the friendship and confidence of those with whom we associate is essential to permanent success in business.

Through over twenty years of sincere effort on the part of our personnel, we have been making steady progress toward reaching the ideals expressed in the 4-Way Test. We have been regarded with a steady increase in sales, profits and earnings of our personnel. From a bankrupt condition in 1932 our company within a period of twenty years had paid its debts in full, had paid its stockholders over one-million dollars in dividends and had a value of over two-million dollars. All of these regards have come from a cash investment of only $6,100, the 4-Way Test and some good hard working people who have faith in God and high ideals.

Intangible dividends from the use of the 4-Way Test have been even greater than the financial ones. We have enjoyed a constant increase in the goodwill, friendship and confidence of our customers, our competitors and the public - and what is even more valuable, a great improvement in the moral character of our own personnel.

We have found that you cannot constantly apply the 4-Way Test to all your relations with others eight hours each day in business without getting into the habit of doing it in your home, social and community life. You thus become a better parent, a better friend and a better citizen. 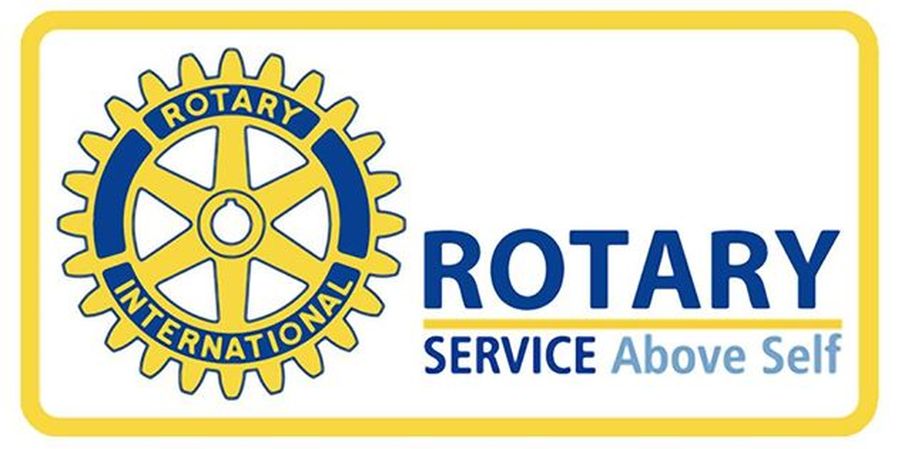 Rotary’s official mottoes, “Service Above Self” and “One Profits Most Who Serves Best”, trace back to the early days of the organisation.

In 1911, “He Profits Most Who Serves Best” was approved as the Rotary motto at the second convention of the National Association of Rotary Clubs of America, in Portland, Oregon. It was adapted from a speech made by Rotarian Arthur Frederick Sheldon to the first convention, held in Chicago the previous year. Sheldon declared that “only the science of right conduct toward others pays. Business is the science of human services. He profits most who serves his fellows best.”

The Portland Convention also inspired the motto “Service Above Self”. During a convention outing on the Columbia River, Ben Collins, President of the Rotary Club of Minneapolis, Minnesota, USA, talked with Seattle Rotarian J.E. Pinkham about the proper way to organise a Rotary Club, offering the principle his Club had adopted, “Service, Not Self”. Pinkham invited Paul P. Harris, who also was on the boat trip, to join their conversation. Harris asked Collins to address the convention, and the phrase “Service, Not Self” was met with great enthusiasm.


The Object of Rotary 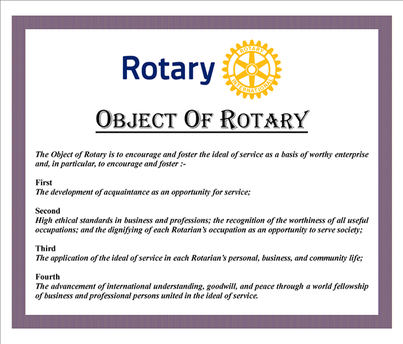 1. The development of acquaintance as an opportunity for service;

2. High ethical standards in business and professions; the recognition of the worthiness of all useful occupations; and the dignifying of each Rotarian’s occupation as an opportunity to serve society;

3. The application of the ideal of service in each Rotarian’s personal, business, and community life;

4. The advancement of international understanding, goodwill, and peace through a world fellowship of business and professional persons united in the ideal of service 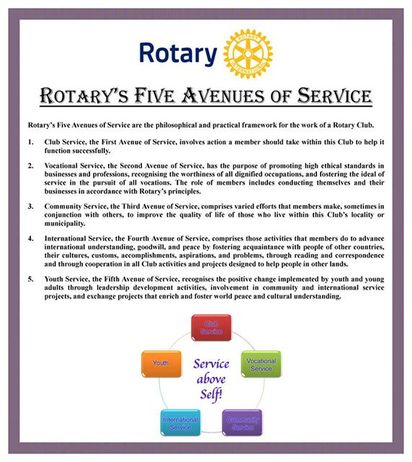 Rotary’s Five Avenues of Service are the philosophical and practical framework for the work of a Rotary Club.

1. Club Service, the First Avenue of Service, involves action a member should take within this Club to help it function successfully.

2. Vocational Service, the Second Avenue of Service, has the purpose of promoting high ethical standards in businesses and professions, recognising the worthiness of all dignified occupations, and fostering the ideal of service in the pursuit of all vocations. The role of members includes conducting themselves and their businesses in accordance with Rotary’s principles.

3. Community Service, the Third Avenue of Service, comprises varied efforts that members make, sometimes in conjunction with others, to improve the quality of life of those who live within this Club’s locality or municipality.

4. International Service, the Fourth Avenue of Service, comprises those activities that members do to advance international understanding, goodwill, and peace by fostering acquaintance with people of other countries, their cultures, customs, accomplishments, aspirations, and problems, through reading and correspondence and through cooperation in all Club activities and projects designed to help people in other lands.

5. Youth Service, the Fifth Avenue of Service, recognises the positive change implemented by youth and young adults through leadership development activities, involvement in community and international service projects, and exchange projects that enrich and foster world peace and cultural understanding.

Why does the Rotary Year begin on 1st July?

Ever wonder why the Rotary year begins 1 July? The international convention initially played a key role in determining the start date of our fiscal and administrative year.

Rotary’s first fiscal year began the day after the first convention ended, on 18 August 1910. The 1911-12 fiscal year also related to the convention, beginning with the first day of the 1911 convention on 21 August.

At its August 1912 meeting, the Board of Directors ordered an audit of the International Association of Rotary Clubs’ finances. The auditors recommended that the organization end its fiscal year on 30 June to give the secretary and treasurer time to prepare a financial statement for the convention and board, and determine the proper number of club delegates to the convention.

The executive committee concurred, and at its April 1913 meeting, designated 30 June as the end of the fiscal year. This also allowed for changes to the schedule for reporting club membership and payments. Even The Rotarian changed its volume numbering system to correspond to the fiscal year (beginning with vol. 5, July 1914).

Rotary continued to hold its annual conventions in July or August until 1917. Delegates to the 1916 event in Cincinnati, Ohio, USA, approved a resolution to hold future conventions in June, mainly because of the heat in cities where most of them occurred. The next one was held 17-21 June in Atlanta, Georgia.

The term "Rotary year" has been used to signify Rotary’s annual administrative period since at least 1913. An article in The Rotarian that July noted, “The Rotary year that is rapidly drawing to a close has been signalized by several highly successful joint meetings of Clubs that are so situated as to assemble together easily and conveniently.”

Since the executive committee's decision in 1913, the end of the Rotary year has remained 30 June.